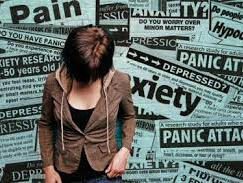 1.Be an active user instead of a passive user. Instead of just scrolling, actively comment, post and like other content.
2.Limit social media use at least an hour before falling asleep. Getting enough sleep is one of the most protective factors for mental health.
3.Be intentional. Look at your motivations for engaging with social media in the first place.

"If you get on specifically to seek out information or to connect with others, that can have a more positive effect than getting on just because you're bored," Coyne said.
In an effort to understand teenagers' mental health and their social media use, researchers worked with 500 youth between the ages of 13 and 20 who completed once-yearly questionnaires over an eight-year span. Social media use was measured by asking participants how much time they spent on social networking sites on a typical day. To measure depression and anxiety, participants responded to questions with different scales to indicate depressive symptoms and anxiety levels. These results were then analyzed on an individual level to see if there was a strong correlation between the two variables.
At age 13, adolescents reported an average social networking use of 31-60 minutes per day. These average levels increased steadily so that by young adulthood, they were reporting upwards of two hours per day. This increase of social networking, though, did not predict future mental health. That is, adolescents' increases in social networking beyond their typical levels did not predict changes in anxiety or depression one year later.different outcomes as a result of the way they are using it," Coyne said.